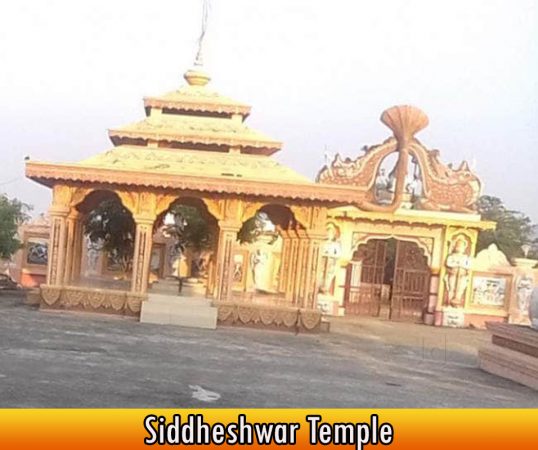 Siddheshwar Temple is a Shiva temple at Deuljhari in Athamallik in Anugul district. It is believed that Siddheshwar’s head was washed away by a stream of spontaneous hot streams inside the temple. Shaiva and Shakta devotees come here for worship and for tourists. On the west side of the town of Athamallik, the road extends to Madhya Pradesh for about six km. After leaving, the bank is located at Deuljhari Peeth.
The bench is located on twenty-four acres. . The shrine is worshiped by four deities such as Siddheshwar, Maheshwar, Kedareshwar and Jageshwar. In addition, the chief deity of the Shakta religion, Thakurani Maheshwari, and the goddess of forestry, Khambeswari, are worshiped here. Crossing the gate of the pedestal, which is adjacent to the Athmallik-Madhapur road, a short distance to the left, there are three cement tanks. To the west are the temples of Maheshwar, Maheshwari and Kedareshwar located on the west side. These are all front-facing. The temple of Khambeswari facing west in front of the Kedareshwar temple. This is the temple of Jageshwar to the west, near the east of the temples. Usually there are more than one Shiva temple in the Shaiva Peethas, one of which has a western face while its deity is called the Western Somnath. So here is the west face of Jageshwar. Siddheshwar’s temple is located on the left side of the road.

Thakur, who was established here, was first worshiped in a shack. The present temple was built in 1936 by Maharaja Kishore Chandra Deo of Athamallik Gadjat. The temples of Jageshwar, Maheshwar and Kedareshwar were later built by the efforts of a number of devotees. Siddheshwar is the chief deity among the four deities of Deuljhari. Devotees first visit Siddheshwar and then other deities. Within the enclosure of the Siddheshwar temple are the main temples Jagmohan, Nat Mandap, Bhog Mandap etc. Jagmohan’s floor is made of marble. The sanctum sanctorum of the temple houses an octagonal statue of Shiva and Parvati. The shibboleth of the womb is about six feet below the surface of the penis, and the bottom of the penis carries a constant stream of heat. It is believed that this shallow water flows into the river. Like other Shiva temples, Ganesha is worshiped on the south, Kartikeshwar on the west and Parvati on the north as the deity of the Siddheshwar temple. In the middle of the fence of the temple is the Barun Kunda on the south side. The water needed for Siddheshwar’s bathing and bathing is brought from here.

It is believed that during the rainy season in the month of Baishakh, more than the bottom of all the shibboleths in Deuljhari erupts and the genitals sink. It is said that such a Baruni joined in 1971. Legend has it that the origin of the Swayamsevak temple at the Siddheshwar temple was during the Tretya period, when Ramchandra was in exile, and for a time resided in the Panchdhara hills not far from Deuljhari. At this time, Sita was worshiping at the foot of the Panchadhar Mountains. As Ramchandra left the Panchadhar mountain, he remembered Sita Gangadevi and asked her to bathe and worship Siddheshwar every day. Since then, Gangamata has been bathing in the lower part of the penis and bathing Lord Siddheshwar in hot water. The Deuljhari hot springs consist of twenty-two hot springs, which are rare in other hot springs in Odisha. Hot water flows from the hot springs of this land. In the middle of the earth, the hot sulfur and water bubbles burst and flowed upstream. Its temperature is one hundred and forty-four degrees Celsius.