There are many incidents of protectionism in mythology and history. From the Asura dynasty in the Puranas to the Mughal emperor Humayun, the Rakshabandhan has protected the sister’s honor.
The Asura emperor Bali was a great devotee of Lord Vishnu, and Vishnu did not want any danger to come to him. Knowing that the sacrifice was in danger, Vishnu left Baikunth and settled in the palace of the sacrifice. So Mahalakshmi did not want it. He wanted Vishnu to be with him in Baikuntha. Thinking of a way to do this, Lakshmi met the victim in a Brahmin costume. On the full moon day of Shravan, he tied the guard with a sacrificial hand. It was then the duty of the victim to understand Lakshmi as a brother. Knowing what Lakshmi wanted, she urged Vishnu to stay in Baikunth. There is a similar myth in the Mahabharata. The story is about Krishna and Draupadi. His finger was amputated while Lord Krishna killed the oppressive babysitter. Seeing the blood coming out of it, Draupadi tore his sari and wrapped it in it, causing the blood to stop. Among Draupadi, Lord Krishna fell in love with her sister. When the Kauravas were about to worship Draupadi at the Kurusava, Lord Krishna donated clothes to protect Draupadi. 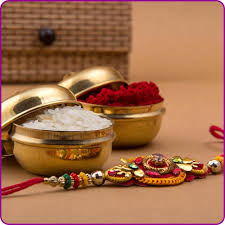 There is also a bond of protection in history. Despite the political conspiracy behind it, the brother did not shy away from protecting the honor of his sister-in-law.
The first was 300 years before Christ. Alexander the Great of Macedonia faced King Puru as he was on his way to victory over India. The first time Alexander was defeated by Puru, Alexander’s wife sent a guard to Puru. Puru adopted her as his sister. The other incident involved Queen Karnavati and Emperor Humayun. The Rajput warriors of the Middle Ages were mighty. They were fighting with the life of an attacker. In a battle like this, when Queen Karnavati of Chittor lost her husband and realized that Sultan Bahadur Shah could not be defeated, she thought of a way. The Mughal emperor sent a guard to Humayun. Humayun, too, considered it his sister’s affection and immediately sent his troops to protect Chittor.

Many plays and short stories have been made about brother-sister relationships. The brother also forgets his own happiness for the sake of his sister. Both Oriya and Hindi movies have such scenes, and some movies show this passion and sacrifice through the guards. Some of the movies and Rakshi songs were sung – Rakshi Tu Rahilu Sakshi, Rakshi Bandhili Mo Rakhib Manar Manar, and Rakshi Vijigala Aakhi Luhre, the songs of Rakshi Tu Rahilu Sakshi.
There are many songs like Hindi Mere Kajal in Mere Vaiya Mere Chanda in Hindi cinema, Rang Birang Rakshi Loke in Unpadha, Yeh Rakshi Bandhan Hai Aisa in Beyman and Behen Ne Bhai Ki Kalai in Silk Ki Dori.
The Shravan Purnima or Ghama Purnima is considered to be the birth date of Lord Balabhadra. Gomata is worshiped on this day in honor of Balabhadra, who is wearing a turban. They have a tradition of bathing and tying guards to their horns and eating cakes. Brahmins also offer mantura pita on this day, and it is believed that wearing this pita relieves the clutches of the Brahma demon.
Krishna’s elder brother, Lord Balarama, celebrated this day, so this day is celebrated as Balarama Jayanti.
On this day, all the animals, cows, cows, etc. are decorated and worshiped. A variety of cakes and sweets are made and distributed among family, friends and acquaintances.
During the month of Shravan, the Jhulan Yatra festival is celebrated for 7 days from Shukla Paksha Dashami to Bhadrava Pratipada. Lord Krishna and Radha enjoy playing doli during this rainy season. Radha Krishna is adorned with swings and doli is played.