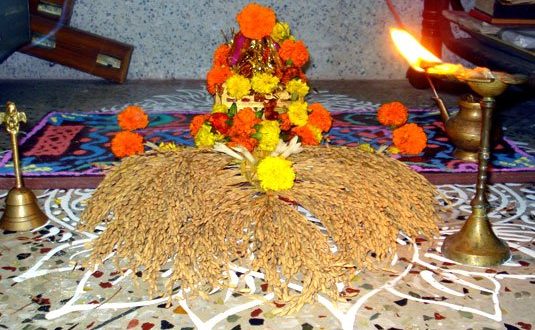 Manabasa Thursday Osha (also known as Manabasa and Maan Osha) is an agricultural festival celebrated in Odisha. During this time, Mahalakshmi is also worshiped at home to increase wealth. Oriya women observe this Osha in the month of March. This worship is not practiced in other countries and states. Manabasa Osha is also called Lakshmi Puja. This Osha is celebrated by people of all castes in Odisha. At this time, Lakshmi is imagined as a symbol of wealth, batsalya and mercy, and is considered to be the lord of the house, prosperity, cleanliness and so on. In the month of March, the house of worship is decorated with paddy ments or “paddy fields”. This menta or beni is made from dhunkenda. The name “Manabasa” is based on the standard set. Standards are used to measure grain, such as rice. Oshati is known as Manabasa because it is worshiped by placing rice in it. The festival is celebrated in the same manner in various tribal societies of Odisha. Santals worship “Iru mamane”, Bhuyans worship “Magushi’s Thursday Halba”, Ho and Omanatya worship Lakshmi. Women who do not have children at this time perform kanji alaa or “dry bride” or “sixty osha” in the hope of having children.

Humanity is described in the Lakshmi Purana of the legendary Balaram Das on Thursday. According to this, Lakshmi, who was surrounded by slaves, one day, with the permission of Manabasa on Thursday from her husband, traveled to the country after Brahmani and won from the big bank. He went from house to house to find out who was worshiping him. He arrived at a Chandaluni house called Shriya after seeing that many rich, big people had forgotten that Thursday. By cleaning the house and wiping it, Shriya was arranging for her worship, arrangements and offerings. Lakshmi was fascinated by his devotion and stayed there. Hearing this, Balarama became angry. The gates of the temple were closed to Lakshmi as she entered the house of Chandaluni, who was considered untouchable in the society at that time. Humiliated, he left the house. Kalia-Baliya (Jagannath-Balabhadra) will teach the two brothers the right lesson if they bet on the way. At Lakshmi’s behest, another palace was built on the beach, and Talbatal looted everything from the temple and turned it into a shrine. Unable to eat, the two brothers starved and finally reached the front of the palace. Disappointed with the hospitality of the mistress, they sought the mistress / mistress. The two brothers felt embarrassed when they found out. Lakshmi rushed to the shrine after promising that the people of the sanctuary would not be barred from entering the house or that there would be no untouchable discrimination.

The first rice harvest begins in March. The farmer brings his threshing floor to the threshing floor. Before harvesting the rice and bringing it home, her housewife picks out the white bottles from it. The paddy is tied to a bottle of rice and the mint is made by drying it and keeping it in great care and care. From Thursday the day before Osha, the courtyard of the house door and the house around the house are wiped with a lime cloth. After the harvest, the Osha is celebrated in the threshing floor as a blessing to Lakshmi, the goddess of food and wealth. Jhoti made on Thursday. This leopard is called the “trident branch”. On Thursday night, the day before Osha’s death, housewives swept the doors of the house and threw stones. On Thursday, women wake up in the morning and begin worshiping Lakshmi after bathing. In the villages, women wipe the clay with cow dung and paint on the backs of fresh rice with jhoti and laxmipad. The courtyard of each door of the house is adorned with leopards and surrounding leopards. A new standard is placed on the mattress. The turmeric and google batteries are applied to the surface of the manna, which takes the form of a face. In it, the cowboy is used as an eye-catcher, and by the way of his creation, the man is placed in a coffin with the appearance of a beautiful face, and a mint of rice is placed on it. Covered in red and beautiful patkana, it is made into a new bride. Some worship the Maan by artisans and worship it with their eyes, nose and ears beautifully made of sol and other items. A sixteen-leaf deity, a lotus, is painted around Malakshmi’s bed. From the perimeter of the house, the mother’s lotus feet are painted to the ground. Some even keep gabbat, gayatulsi, kalapati, cinder pharaoh, brass idols, and so on. The paddy field is also depicted in jhotichitis that day. A special place is set aside for Thakurghar for the installation of Lakshmi. Sixteen petals of lotus flowers are carved on the back of the shrine. Shukladhan, mana, gua, cowdi, coconut, oak, barkoli leaves, vermilion, incense and offerings are pre-prepared for worship. The vermilion is washed in turmeric water before drying and dried in the sun. First of all, there is something new in a cot. The manna or guni called Sindoor is filled with fresh white as a symbol of the goddess Lakshmi and a gua is placed on it. The mantle is placed on a cot and covered with a new patchwork of rice. Lakshmi is adorned in the guise of a bride and installed with sandalwood vermilion and so on. According to the rules, Lakshmi’s wooden idols, pots, mirrors, kajjal and sugarcane and radishes are placed on the khatuli near the khatuli.

Incense, lamps and offerings are offered to Lakshmi during the puja. Cakes and fruit (bananas, cheddar, coconut, gum, pepper and other fruits) are served to Lakshmi. In addition, manda cakes are made and enjoyed. Lakshmi is made by making different cakes in different shifts. Lakshmi is offered incense, lamps, offerings, chalna, gum, coconut, and banana in the baby food. Of the 3 incense, it is called the incense. Preparations for the midday incense then begin. In the afternoon, khiri or taran, chukulipitha, vegetables, etc. are prepared to be used in incense burning. At noon, the Lakshmi Purana is recited in front of the mother. This food is eaten by every member of the household. There is a rule that this meal should not be given to anyone other than the family. During the twilight, the evening incense is again worshiped like a baby incense. On the 2nd Thursday, cheetah cakes, Dahikalua, on the 3rd, Khechudi-Dalma and on the 4th, Manda cakes are served. On the last Thursday of the month of Margashi, the vows are completed. On this day, Manda cakes and khiri are consumed according to all the rules. After eating, the rice in that standard is stored in another place. All other items of worship are taken together and dumped in ponds and ponds. The rice used in the puja is cooked khiri or jau in that rice and eaten only by the people of the house. Thus, from the invocation of Lakshmi to the expulsion, all the rules and regulations are followed, and various improvements are made to the house.