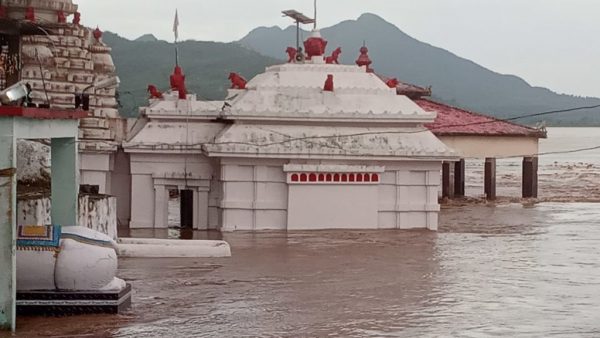 The Bhattarika temple is located in the village of Shashang in the Badamba block of Aathgad in Cuttack, Odisha. The temple of the Hindu goddess ‘Maa Bhattarika’ is located on the banks of the river Mahanadi. The mother is thought to have been a sixteen-year-old.
According to history, two brothers, Hatt and Mall, established two villages, Shank and Mahuri, on the orders of Puri Gajapati Maharaja. Over time, the two villages have become shambles. As the two brothers searched for a place to build their fort, they saw a miracle in a place occupied by a corpse and realized that it was the right place to build the Birmati, fort. But the corpse was not ready to vacate its place. So the two brothers fought, and Shabar also fought after Shabar’s death in the battle. Shabari also lost, and before his death he advised the two brothers to worship Mahakali and Mahattarika of Kharod. The two brothers later built the Mother Temple there. Bhattarika’s name is Brihadamba, according to which they named their kingdom, and later it became misplaced and became big. The shrine is known for its combination of Shakta and Shaiva religions. King Parshuram carved a stone on his arrow and worshiped the idol of the mighty Mahamaya Maa Bhattarika, so this Shakti Peetha is called Parshurampitha and the mother is worshiped by devotees as Abhay Bardayini. Legend has it that Parshuram prayed to his mother Bhattarika to make the earth a desert. For the attainment of Vishnukala, his mother advised him to worship Neelmadhava in the Padma area of ​​Kantilo and gave him the Divyastra for the death of Sahasarjuna. According to mythology, after the defeat of Parshuram Sahasrarjuna, after worshiping Maa Durga, he was defeated there to help Parshuram and save him. Here the goddess is offered cooked fish.

During the autumn puja, special peace puja is performed along with the sixteenth-day puja of the sixteen-day-old goddess. The annual pilgrimage is held here on the great day of the Dashahara festival. According to the Bengal Gazette, the Mahasthami pilgrimage began at Bhattarika Peetha in the 1700s from the time of the then king Fakir Chandra Dev of Badambagarh. During the two-day procession, devotees of the past were sacrificing many goats for the goddess. Meenshi sacrifices have been banned since 1975 and goats have been banned since 2000. Goddess Bhattarika Sriyantra Asina. That is why some devotees consider him to be the most beautiful Tripura beauty. Mother Adyashakti, on the other hand, is worshiped as a lion because she is a lioness. The etiquette of the autumn worship is different from the daily rituals of the mother. Ashwin Krishnapaksha II, the date of Mulastami, marks the sixteenth Parvan festival of the mother. With the special worship of the Goddess every day, the devotees observe this sixteen-day fast and perform the Sharadiya Puja with devotion. According to tradition, the sixteenth day is celebrated with special gold ornaments at the beautiful Tripura Maa Bhattarika, and this spectacular golden eclipse is never seen at any other time of the year. Navaratra Puja, the second day of the Parvan Puja of Kampilyavasini Ma Bhattarika, begins with the holy Mahalaya New Moon. The festival is performed with the worship of Mahasaptami, Mahasthami, Mahanabami and Dashamithi, i.e. the holy Dashahara. Devotees from all over the state come to visit the mother from the Mahasaptami of the Devi side to the Dashahara. The locals fast with great devotion to Maa Bhattarika and fast in devotion and go to the temple to pay their respects to the mother on the Dashahara. Like other peeths in the state during the Sharadiya Puja, the mother is adorned here in various forms of the Dashmahavidya described in the Chandipurana every day, although she is not adorned here. According to tradition, the goddess Bhattarika is worshiped every day as a teenager, a virgin and a devotee in the morning, noon and dusk, respectively. During the Parvan Puja, the mother performs special chanting with chanting, pala, chandi reading every day. Crowds of people flock to see the Kalesi Uvayatra in the middle of the Mahasthami pilgrimage.