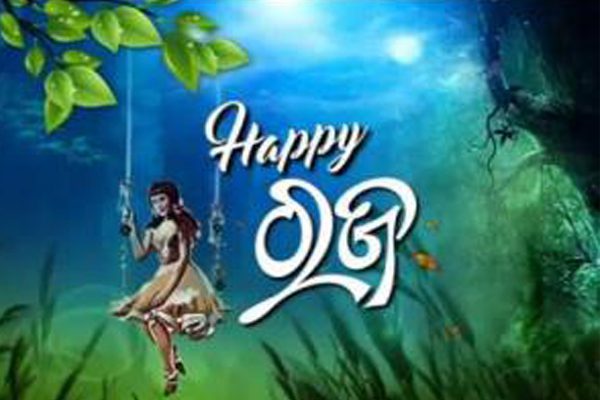 Rajo is a traditional festival of Odisha and a public festival of the state. It is celebrated for three days. Gemini begins on the second day and then begins the rainy season. The first day of Raj Sankranti is the first Raj, the second day is Raj Sankranti, the third day is Bhumidaha or Bhumi Dahan, the fourth and last day is Basumati bath. This indicates the beginning of farming. The literal meaning of the word “Raj” is “Rajbati”, which is considered to be the mother of the earth, which symbolizes the arrival of menstruation and the birth of new grains in the coming of rain. On this day, farmers worship Basumati and Halalangal and take a three-day break from farming. The day is celebrated with rice cake, pan khiya, girls ‘raj doli and puchi games, boys’ ludu, tas, bagudi, etc.

The month of Asadha is the first month of the four-month vows. During these four months, sages and saints leave their pilgrimages and concentrate on one place. This month is considered to be the month of the greatest intercourse of married life. The poem “Meghaddut” by the poet Kalidasa is based on the message sent through the clouds to the beloved, widowed Yaksha Priya. The clay mother produces many kinds of crops and leaves them in our hands. Just as a mother needs rest before reproduction, it is believed that the clay mother, who is about to become fertile, is given three days’ rest. Digging is celebrated to awaken enthusiasm, insanity and renewal of power among the motherland. Menstruation is a training festival for virgins. For women who are unmarried, Raj is a symbolic gestation for pregnancy. As a woman, Kiri has to perform her duties in the future, which is virgin Ann has to learn, on the occasion of this Raj festival. The virgins observe a woman’s customs and codes of conduct within the menstrual cycle, and in the future, when a girl performs her duties in a woman’s role, this code of conduct helps her. For three days, as a menstruating woman, the virgins rest without cutting the earth, without plowing the land, and without doing chores, bata, etc. As a groundbreaking contribution to the genre, Raj has three days off. In the same way, menstruation is planned to make the future of the bride and groom happy. They will be able to carry out the rituals of a mother properly by observing the rituals of the menstruation, and in the future they will learn the rules of the world by learning from their own experiences of their daughters.

During the festival, housewives take a break from their normal work and play a variety of games. Abhiadi girls wear saris, etc., and spend time in raj doli games, puchi games, and so on. On this day, no one walks barefoot in honor of Mother Earth. There is a rule of thumb on the ground made of leaves / bark. On this day, burnt cakes, chocolates, etc. are eaten. Traditionally, it is forbidden to walk barefoot on this day. The virgins do not walk barefoot, often hanging in baskets and walking around wearing gua kholpa or slippers. The Basumati bath is the last day of the Raj festival. This is the pure bath of Basudhamata. It is known as Dharasnan, Mahalakshmi bath, Mahalakshmi bath and pure bath. The body is bathed in milk in the early morning, wrapped in turmeric, rubbed with vermilion, kajal, adorned the earth’s mother’s voice, placed on the pedestal, and placed in a bowl of amber. According to the rituals of menstruation, the earthly mother is purified by bathing after three days of rest. The Mahalakshmi Pedi, which closed on the last Thursday of Margashi, opens on this day. On the fourth day of the morning, the pure bathing ceremony is followed by three days of untreated menstruation. On this day, the joy of menstruation fades away and spirituality takes its place. Devotion to the earthly mother is awakened on this spring bathing day. After bathing and bathing, Basumata becomes empowered, i.e., the bearer of the seed.

Pan: Panchia in Raj is an old Oriya tradition. Preeti’s bond is drinking. Six lakhs of love, love and friendship are set in this country. Gives, takes, eats, eats, talks secretly and asks, these six are about intimacy and intimacy. At the end of the meal, the tablecloth service is a lifeline. Oriya Thakur Badthakur Jagannath goes to sleep by serving tambul every day after eating. Drinking is the face, the satisfaction. The issue’s end has the recaptured Doomsday in the control of the West again. In Raj, the girls make everyone drink. According to Ayurvedic scriptures, alcohol is an antidote to worms and worms. The lime in the drink softens the iron-rich (calcium) and khair teeth. When you drink, veins are cut from the leaves because the drink is destructive. The radiance and aroma of the razor add to the drink throughout the year, making the jewelry even more fascinating. Rajpan uses 10 to 12 types of spices like gua, cardamom, gujarati, fried coriander, rice and coconut, cherry, clove, kababchini, chua, pan mahuri, fragrant saffron hair, khair. It is decorated in a beautifully decorated plate with cloves topped with triangular, square shapes. The taste of menstruation is different from ordinary drinking. When the rice comes, the price of the drink also rises in the market. It’s a woman’s job to cook regularly. As the earthly mother is rested in Raj; Therefore, on the first day of Raj, many types of cakes are made, especially burnt cakes, which are not easily destroyed and last longer. Everyone enjoys eating fruit and a variety of cakes together instead of rice.