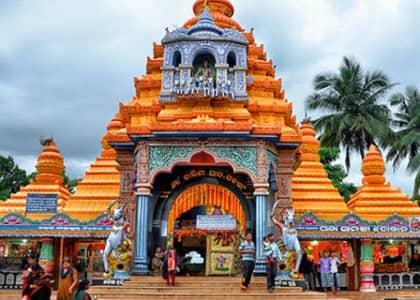 Tarini Mandir is a Thakurani temple in Ghatgaon in Kendujhar district of Odisha. The presiding deity is Goddess Tarini. It is said that the Ma Tarini temple at Ghatgaon was built in 1480 by the then king of Kendujhar, Govinda Bhanjdeo. At the behest of the then Gajapati Maharaja of Puri, Ma Tarini was established as the Shakti Peetha at the new temple Ghatgaon. Devotees believe that Maa Tarini must be fulfilled if it is done manasik. It is said that he was first worshiped by Banabai Kandha. In fact, Maa Durga Dashbhuja and Maa Tarini Chaturbhuja. She holds the wheel in her left upper hand from Ma Tarini’s four hands. The lower left hand has a trident. Similarly, in the upper right hand, he holds a sword, while the lower hand is empty. In this hand Maa Tarini blesses the devotees. But not all of his idols or paintings have these weapons. The painters decorate the mother with different weapons of their choice. There is a legend about the appearance of the statue of the Mother of God. During the exile of Lord Sri Ramachandra and Mother Sita during the Tretya period, Rama and Lakshmana mourned and worshiped the omnipotent mother Durga after the demon was abducted by the demon Ravana. Satisfied with the worship, the goddess uttered the words – “Bats”. I will appear before you as a deer of crisis. But if you try to see me, I will become a rock. At the word of the goddess’s fear, he meditated on the worship of Sriram and Lakshmana. Sensing the presence of the goddess, Lord Sri Ramachandra’s eyes were opened when he touched his mother’s feet with the intention of touching his feet. Ramchandra saw the goddess with his own eyes. The goddess smiled and promised to overcome all the difficulties, turning to stone as per the previous conditions. From that day on, Maa Durga became known as Maa Tarini.

There is a description of the appearance of the mother in Ghatgaon. Kendujhar was a large Gadjat kingdom under the Puri Gajapati Maharaja. Its original inhabitants were Kandha, Bhuiyan, Zhuang, and Shabar. Kendujhar was full of hills, mountains and dense forests, a haven for wild animals. There were no roads for traffic. Kings and royal officials rode horses or elephants. Fearing wild animals, the common people had to bandage and walk on the hilly forest roads. Five hundred years ago, Trilochan Bhanj was the king of Kendujhar. His son’s name is Govind Bhanj. Prior to his youth, Govind Bhanj had a special interest in bodybuilding, martial arts, and horse riding. In Puri at that time the Gajapati Maharaja was Shri Purushottam Deb. After being defeated for the first time in the battle of Kanchi, King Purushottam Deb, devastated by the loss of his life, took refuge in Jagannath, the lord of the world, helpless everywhere. “But remember, tomorrow morning we will make the commander of this war the one who will see the immortal treasure lying on the roof of the house. In this battle you will be victorious, you will regain your dignity.” In the early hours of the morning, Purushottam himself went out and saw a flower-laying garland lying on a man’s ranch not far from Rajnagar. Seeing this, the king called the guard and asked him to bring the owner of the house with him. Govind Bhanj, a deserving son-in-law of Kendujhar, who had left Kendujhar and lived in Puri due to a dispute with his father, but never introduced himself as a prince. King Purushottam Deva was waiting for their arrival. Yuvaraja greeted Govind Maharaj. Purushottam Dev’s joy was unbounded when he was introduced to the handsome and strong young man Govinda Bhanj. He told Govinda Bhanj about Jagannath Mahaprabhu’s wishes and tied the captain’s weather on his head, with his own hands. In the company of troops, Commander Govind Bhanj entered the border of the Kanchi state. On the way, the horse suddenly stopped, not moving forward at all. Distraught, Govind Bhanj got off his horse. Mother Tarini’s back became visible as she wondered why the horse had stopped. Devi Bhakta Govind Bhanj entered the pedestal after hearing the glory of his mother from the locals. Apparently, the devotee’s mother was waiting for Govind Bhanj to come to Kendujhar. Govinda was engaged in worship. The mother gave the groom the fear of winning the war. After winning the battle, General Govind Bhanj returned to Puri with Madanmohan, Raghunath Jiu and Maa Tarini after worshiping the Ishtadev Ganapati of Kanchi.

After the death of Trilochan Bhanj, king of Kendujhar in 1480, Govind Bhanj became the king of Kendujhar. Preoccupied with the affairs of the state, Mother Tarini regretted not being able to bring Kendujhar. The compassionate mother-in-law understood the mind of Bhakta Govinda. Shortly afterwards, Gajapati summoned Purushottam Dev and sent him to Govind Bhanj. He went to Puri and met Gajapati. Gajapati conferred on him the title of ‘Jai Govind Bhanj Maharaj’ and presented him as a gift to the Aathgad area (now Anandpur sub-division) under Puri. Allowed it to be enjoyed as a tax-free state. Govind Bhanj, however, wished to take the idols of Jagannath, Balabhadra and Subhadra to the goddess Madanmohan, Raghunathjiu and Maa Tarini, who had brought him from Kanchi. On hearing this, Purushottam Deb said: ‘You can take everyone, mother Tarini, how are you going to take her to hell? Not disappointed, Govind Bhanj went to his mother and worshiped her. That night, Gajapati told Purushottam Dev in his mother’s dream, ‘Govinda is my greatest devotee. I’ll go to Kendujhar with him, let him. ‘ The next day, after hearing all the stories, Gajapati said to Govinda, “Blessed Govinda!” Make arrangements to take the mother. Govinda was worried about how to take his mother. Just as my mother dreamed that I would come to Puri from Kanchi on horseback, I will follow you on horseback. As the horse rides, you will know from the rumbling sound of my feet that I am following you. But if you look back and try to see me, I’ll be stoned to death. The next day, Govinda walked with the idols of other deities to Kendujhar. Afterwards, the devotee’s mother, Tarini, rides on horseback. The sound of Nupur ringing in Govinda’s ears. But Leela’s mother Tarini’s leela is bizarre. Crossing the Anandpur border, he entered the Ghancha forest on the Kendujhar border. Maya spread right in the middle of Kendujhar. Mother Govinda’s horse did not move. The roaring sound of Maa Tarini’s Nupur in the background was not heard. Govinda looked back in confusion and saw that the triangular, radiant mother was sitting on the horse. The mother was stoned because the condition was broken. “It simply came to our notice then. Govinda was shocked to hear this. He humbled his mother and arranged for the Dehuri to stay there. Since then, Mother Bhagwati Tarini has been worshiped at the Shalban Ghera Peeth. Even in Kendujhar, King Govinda used to come every day on horseback to visit Maa Tarini.

Dehuri worshiped in the traditional way of worshiping their mother in a dense forest full of natural beauty. But from time to time, the worship of the mother was interrupted when someone was born or died in the family of the priest. King Govind Bhanj was worried that the Brahmins could not be found in the remote forest. The mother of the devotee understood the plight of the devotee and said in a dream order, “We will fill the cow dung in a clay pot and tie it to the Kusum tree branch near my abode.” At the end of the Dehuri puja, the puja water will be sprinkled on that occasion every day. He will take a little ghee from the pot and drink it while he is unclean, and he will dip his head in some ghee and sprinkle it on his head. That way he can get rid of his uncleanness and worship me. From that day on, the name of the mother’s seat was Ghatgaon due to the ghee ghat being tied. . Devotee Govinda Bhanj died in 1534 at the age of 84, after a long reign in the state. However, for centuries, it has been said that the devotee’s mother, Tarini, became a resident of Ghatgaon, fulfilling the wishes of the devotees. As before, the fruit and food are still enjoyed by the mother. As a mother’s favorite fruit, thousands of coconuts are coming in and out of the state every day. He is not a remote forest less than five hundred years old. But the mother’s back is in place. On the side of the Anandpur-Kendujhar main road, a new beautiful temple of Maa Tarini of Ghatgaon Peeth is visible. Maa Tarini’s Asadhar festival is also celebrated as a big festival. The festival falls on the last Thursday of the month of Ashar. In 28 villages, the chiefs are invited, and after they come to worship their mother at night, farming begins.

The Chaiti festival is celebrated every year at the Ghatgaon Tarini fence. At this time, Tarini is crowned after the majana, the sixteenth treatment, the mangal aalati, and the big massacre. The Chaiti Hills open from 5 to 6 p.m. When the hill opens, devotees line up to visit. More than 30,000 devotees gathered on April 9, 2016, to celebrate the one-day festival of Chitiparva Pana Sankranti, which has been celebrated for seven days since 1937. In the morning and evening, in the morning and in the evening, special rituals are performed according to the rituals of Mangalalati, Bhagavata Patha, Chandipatha, Homayajna and Satyanarayana.
Every year on this one day, Ma Tarini fasts to wish the devotees well. Mother’s coronation is held in the evening while the temple is closed throughout the day.