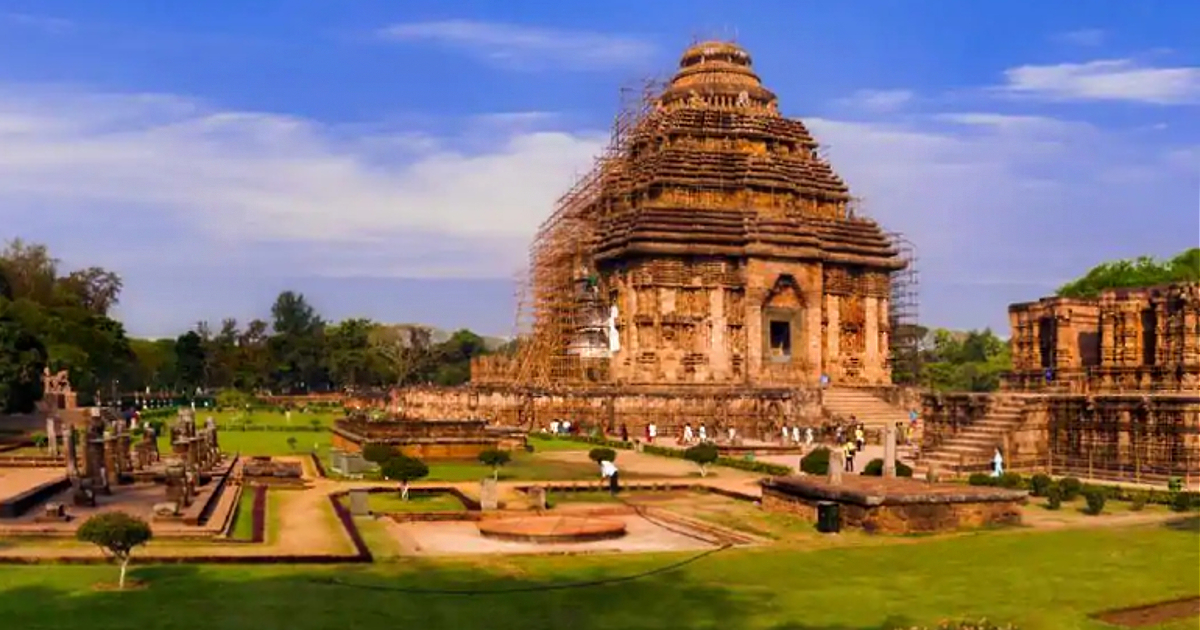 Konark Sun Temple is a 13th century Sun Temple located in Konark, Odisha, India. . The temple is said to have been built by the Langula king Narasimha Deva of the Ganga dynasty of Utkal in about 1250 AD. Its main part is slowly eroding. It is a world heritage site. Its names are inscribed within the Seven Wonders of India listed in the Times of India and within the Seven Wonders of India listed by NDTV.
It was built at the confluence of the Prachi River and the Bay of Bengal. At that time it was a seaport. It is thought to have been named Konark after Konagar. Analyzing the word Konark, it appears that the Sanskrit word is derived from a combination of angles and arcs. The angles are the union of one side or two sides or lines, and the arc means the sun. Since the temple was built for the Sun God, it is believed that the place was named Konark. The two temples were paved for sailors. The Kalinga temple was built in the style of Kalinga architecture. The main temple with a sanctum sanctorum is 229 feet high and the facade is 128 feet high. The 13-foot-high stone floor was built in the form of an airplane and a Jagmohan chariot. He was surrounded by 24 wheels 9 feet 9 inches high and seven horses in front. Jagmohan was 123 feet high and 225 feet high. Now the plane is almost destroyed. There is now a sanctuary and a throne. Although the facade was completely safe, parts of the Nat Mandir and the Bhog Mandap remained safe at the time of the calamity. The length and breadth of the temple fence are 857 and 540 feet, respectively. The temple is surrounded by a natural environment and is surrounded by trees growing on sandy soils such as cashews and baby plants. It’s as big as it is today. This is actually the mandapa of the main temple. Standing from the front, the ruins of the main temple are visible. The main temple is about 200 feet (60 meters) high and is believed to be the tallest temple in India.

Chlorite: It was used in the construction of idols, on the throne of gods, and on the gates of the gates.
Laterite rock: It was used under the altar, on the stairs, and in some parts of the walls.
Kondalite (Konda.ite) rock: It was used in other places.
In addition, the temple is built by oxidized and weathered ferruginous sandstone, which has been scientifically strengthened.

The construction period has a definite role to play in the Konark temple. This is because the Konark Hindu Temple is the last step in architecture and the highest point. According to Stirling, 1241 BC. According to Abu Fazal, Ferguson and Rajendralal, the ninth century. According to Hunter, from 1236 to 1281 AD.

The temple is built of a huge chariot drawn by seven swift horses. All of it is engraved with carvings. At the base of the temple are 12 finely decorated wheels with fine carvings. These wheels are one of the main attractions of the temple. These wheels work as sundials. The right time is coming from the shadows of these people. The roof of this pyramid-shaped temple is about 30 meters high. Like the Khajurho Temple, the temple has a large number of works of art.

On the two sides of the door are guarded by two giant ivory lions. The two elephants are said to be sitting on two lying human beings. Like every old temple, there is a Nat Temple in front of the main temple, where artists perform dance songs dedicated to the gods. Various flowers and geometric patterns can be seen everywhere. In addition, there are many types of deities, yaks, gandharva, kinnar, male musicians, nuts, nuts, loving couples and happy festivals of rural life, war and hunting. Along with this, the temple is home to a fascinating spectacle of how many species of animals and birds, about 2,000 attractive and living elephants, mythical creatures, various species of vines and ornamental and majestic Oriya architecture adorn the spectacular views of the temple. . Konark is also famous for its temples. The vivid depiction of this gentle secret of life shows the superiority of Oriya craftsmanship. The work of all kinds of human beings, human beings, human beings, human beings, is vividly depicted on the walls of the temple.

Langula Narasimha Dev went to the South to fight at the age of just 18 and returned three years later with a large fortune. His father Anangbhim will give him the throne. My mother advised me to build a huge sun temple with a lot of money. This is because not a single temple has been built in the only archipelago of the four major areas of Odisha. The other three areas are Puri, Bhubaneswar and Jajpur. The industry started. Stone began to be brought from far and wide. The construction of the temple began but five years later. The first Narasimha Deva ascended the throne that year. It is rumored that it was built by Samba, the son of Lord Krishna. Samba, who suffered from leprosy from his father’s curse, came here and practiced asceticism for 12 years. Satisfied with his penance, he built this amazing temple in his honor as the sun god rescued him from the disease. From 1238 to 1264 AD, King Langula Narasimha Deva ruled Odisha. He wanted to build a beautiful temple to worship the sun. At the king’s command, work began on the temple, selecting 1,200 of the state’s best artisans. The chief craftsman in the construction of the temple was Bishumaharana. The temple began at the mouth of the beach Chandrabhaganadi. The temple was built in the shape of a chariot. Seven stone horses were added to it. There was a statue of the sun on the throne of the temple. The temple was built at the expense of 12 years of revenue in Odisha. From the base of the temple to the roof, the work was completed. But the number of times the artisans sit on the temple floor falls. Bishumaharana, the chief craftsman, could not use all his intellect. The king became enraged and summoned Bishumaharana and said: “I am giving you seven more days. Bishu Maharana issued the king’s order to all the artisans. Everyone has a bear in mind but what to do? When Bishumaharana came home, she had a son. His name was Dharma (Dharmapada). He insisted on visiting his father, and his mother sent him away with a stick. Dharma approached the temple. Twelve years had passed, but she had never seen her son. He recognized the boy by looking at the fence of the house. Seeing the sadness in his father’s mind, Dharma asked and understood everything. At night, 1,200 carpenters will be beheaded. She was devastated to learn that she was a child of the craftsman, and that she could be beheaded in the temple. With the permission of his father, he climbed to the top of the temple and overnight measured and sat down. The work of the temple was completed before dawn. Everyone was happy to see it, but the 1200-year-old thought that what 1200 could not do was done by a 12-year-old boy. All the carpenters said this to Bishumaharana.
According to another legend, the construction of the temple was not completed. According to the Bayachkada inscription, the idol was erected inside the temple on 1256 Magh Shukla Saptami on Sunday (historians have determined the English year by analyzing the Oriya calendar of that time.

There are many legends in favor of the cause of the destruction of the temple. According to the records of the Madala Panji, the Orissa of Kalapahad invaded and destroyed many temples. The demolition of the Konark temple was not easy. Because the thickness of the temple was 20 to 25 feet. Kalapahad knew the structure of this temple. As he removed the bowl, the stone’s surface collapsed and Konark collapsed. The epicenter was reported below the Pacific Ocean floor, however; no tsunami alert was issued. According to the legend of Sheikh Kabir Batini’s Afsana-4-Shahan, he was a Batini (Afghan Pathan). History of Odisha states that in 1508, the Black Hills invaded Odisha and destroyed many temples in Odisha, including the Konark Temple. The Madalapanji describes how the Kalapahad invaded Odisha in 1568 AD. Somehow he managed to relocate the Dadhinauti of the Konark temple and the entire palace collapsed. Many of the stones fell on the roofs of the temple’s facades, which were also destroyed. Many idols and side walls of the Kalapahad temple are also said to have been destroyed. Sun worship was stopped here in 1568 AD after the relocation of the idol of the Sun God of Konark during the Muslim rule in Odisha. As a result, both pilgrimages to the shrine were reduced. Gradually the crowds declined and it remained forested. The port of Konark was also closed due to enemy attacks over time. In 1626, the then king of Khordha, Narsinghdev (son of Purushottam Deva), was taken to Puri along with the idols of the Sun God, and two other traveling idols, the Sun and the Moon. The idols are now worshiped in a temple on the outskirts of the Jagannath Temple. At the front of the Konark temple was a large stone statue of a new planet. The then king of Khordha transferred it. He laid it at the Puri Jagannath Temple. During the Maratha rule, parts of the fence of the Puri shrine were made of stone taken from Konark. Of all the temples, the Konark Temple’s Nat Temple remained intact for several days. It was later demolished by the Maratha rulers, thinking it was an unnecessary structure. On the 16th, a Maratha saint took Arun Khamba here and erected it in front of the Lion Gate of the Puri Jagannath Temple. By the end of the eighteenth century, the Konark temple was gradually abandoned, disappearing into the woods and sand, becoming a haven for ferocious animals and robbers.

According to locals and guides, one stone plate was placed on each of the two stones of the Konark temple (which can still be seen today). The temple was fortified with iron beams. A huge 52-metric-ton magnet was placed on the roof of the Dadhinauti or temple, which could not be increased by more than a hundred. Because of this magnet, the bank was able to stand firm without being affected by the adversity of the beach. The main statue did not sit on a throne. It was floating in the air due to the strength of many of the hand-held magnetic resonators. The temple was built in such a way that the first rays of the sun were reflected through the Nat Mandir in the navel of the main statue in the sanctum sanctorum. It was seen in the early hours of the morning for a few minutes. The magnet at the center was later removed by the British.
Many poets have praised the temple’s artistry and praised it. Rabindranath Tagore said, “Here the stone speaks more than the man.”