Thirty five km. to the north-east of Puri lies the World Heritage Monument, the Sun Temple of Konark. Twelve hundred craftsmen had toiled hard for 12 long years to erect this monumental wonder where 12 year’s revenue was spent. Modeled after the floating chariot of the mythical Sun God, the temple is a quintessence of imaginative craftsmanship of ancient Odisha. The temple architecture was designed as drawn by twelve exquisitely carved stone wheels and seven galloping horses. And the kings, queens, generals, foot soldiers, sages, priests, elephants, horses, courtiers and courtesans depicted on the walls and the panels with finesse open a window to the nostalgic times of medieval Odisha.

The annual Konark Festival, which is held in an open air auditorium with the temple as the backdrop, showcases a magical parade of India’s classical and traditional dance forms. Eminent dancers and their troupe delight visitors in the wintry evening of early December with dramatic choreographic.

Besides, the dance performances the visitors will be treated, in an Artist Camp, to an exhibition of Orissan temple sculptures which are often described as poetry transcribed on stone. Sand Art exhibition will be yet another attraction for tourists. 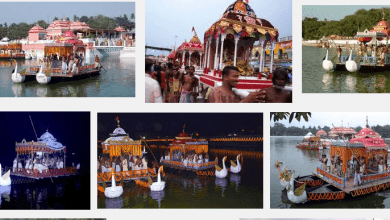