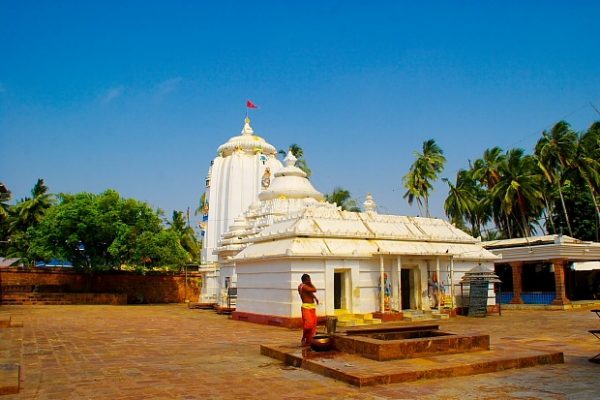 The Alarnath Temple is a temple of Vishnu located at Brahmagiri in Puri district. Brahmagiri is 20 km from Puri Narendra Puskarini on the Puri-Satpada road on National Highway 203 (a). On a five-acre site, the temple of Sri Alarnath, 50 feet 5 inches high, is located between the Ketki, Baul and Narikel forest environments. Surrounding the temple are the Sri Chaitanya Temple, the Shiva Temple and the temples of various Thakurani, the Navagraha Stone, the Nat Mandir, the Prayer House, the Bhogmandapa, the Mukhshala, and the Yajna Mandapa. Before the rath yatra, the bath falls first. After this great bath, the devotees, according to local myths, suffer from high fever and fall into the house of Ansar. In the midst of the onslaught of the Ansar, the Daitapati servants, known as the descendants of the Lord, perform their services. At that time, devotees could not visit the temple for 15 days. So at this time the devotees are not able to see the Sreejivas and attain virtue by visiting Sri Alarnath of Brahmagiri. There is a saying that visiting Sri Sri Nath on the Ratna throne of the temple is as good as visiting Sri Alarnath during the Ansar. Therefore, during the Ansar, there is a large crowd of devotees at the Alarnath Temple. It is a popular place for black devotees, even if it is not a tourist destination. Because Lord Alarnath is the moving idol of Lord Vishnu.

According to historians, the temple was built in 1128, during the reign of Madan Mahadev, the fourth king of the Ganges. The quadrangular Alarnath idol, made of polished black muguni stone, is very adorable on a stone throne set in the middle of the plane of the temple or the sanctum sanctorum. The idol in its standing form is adorned with conch shells, chakras, mounds, and lotuses. The sculpture of Alarnath, which is delicately carved, features Dravidian-style sculpture. From time immemorial, worshipers have been performing the services of the Alarnath Mahaprabhu for generations. The idol of Shri Alarnath is made of Kalamuguni stone. There are arches around the statue. The goddess Sridevi, the goddess Bhudevi, exists under the arch. The eagle is praying under the feet. Mr. Jiu has a conch shell in his upper left hand and a wheel mark in his right hand. There are piles in the lower left hand and lotus marks in the right hand. Therefore, Shri Alarnath is called Chaturdhamurthy Narayan.

There is another mythology about Alarnath. Speaking of the time of Satyayuga, Brahma, the creator, once performed great penance to gain the vision of Lord Vishnu. Satisfied with Brahma’s asceticism, Lord Vishnu appeared to him in the form of a quadrangle and said, “I am satisfied with your asceticism.” You make a square statue of me and worship it here. Following God’s command, Brahma built a moving idol of Vishnu in black muguni stone and worshiped there. That statue is now popularly known as Alarnath. The place on which he practiced asceticism was later renamed Brahmagiri. The area was later called Brahmagiri. Another myth is that King Indradyumna came to the earth to establish the Brahma temple during his reign. The place where he first descended to the earth was later called Brahmagiri. The creator worshiped Vishnu after stepping into the earth. The place where he worshiped Vishnu later became known as Alarnath.

The Albar communities from Tamil Nadu set up the fourth idol here and the Brahmins of this community worship the Lord. According to Purushottam Chandrika, a Tantric Brahmin named Albanda Acharya flies to the temple in solakhia bat tree near Swargadwar to visit Jagannath during the fasting period. . According to researchers, the name “Alarnath” comes from a Dravidian word. The word Dravid means “alloyer”. So Aloyarnath is really the master of devotees. Over time, the word Aloyarnath has been misinterpreted and became popularly known as ‘Alarnath’ in Albandanath, Albarnath, Alalanath and finally the local people. According to Purushottam Chandrika, on the other hand, a Tantric devotee named Baba Albandacharya, the supreme Tantric, could not be seen due to Ansar when he came to the temple to see the Lord. He entered Ansar’s house in the form of an illusion, using his own means. Seeing an octagonal lotus in Ansar’s house, Alwanda tried to sit on the lotus, while the petals of the lotus turned into a beautiful woman, mocking the delusion. As a result, Alibandacharya insulted Jagannath’s vision and attempted to immerse himself in the sea. Suddenly, a huge eagle jumped in front of him and headed south. Thinking this was God’s command, he traveled south and reached the Alarnath Peeth in Brahmagiri, where he was shocked to see the stone Vishnu idol. Since then, the Lord or Nath of Al Binda has been renamed Alarnath and later renamed Alarnath. Alarnath’s temple is an ancient temple with fine carvings. In the age of truth, the Lord’s pastimes were manifested in Brahmagiri. However, after the leela had been kept secret for some time, Alarnath’s glory was again publicized when he visited the shrine of the great Vaishnava saint Chaitanya. Mr. Chaitanya spent the last 18 years of his life in Shri Kshetra. He used to visit the temple every day to visit the Jagannath Mahaprabhu at the Gambhira house in Kashmir. At the time of Ansar, Birah was devastated by the flames of not being able to see the Lord. At the behest of the Lord, he reached the pedestal of Alarnath in Brahmagiri and was shocked to see the idol of Narayan. Dandavat bowed to a piece of stone lying there. Without seeing Srivigraha, his body was so hot in the flames of Birah that the piece of stone melted according to the size of his body. The stone is still worshiped in the temple precincts. The Vaishnavas of Sri Chaitanya Panti Gaudiya come to this place and pay homage to Lord Alarnath and pay homage to that omnipotent stone. It is well known as a sacred spiritual place for devotees.

Like the temple’s bhoganiti, the bhoga is held here. At 7 a.m., children are served eggs, morning incense, eggs, khechdi, pulses and vegetables. At noon the milk is consumed and the hill falls. Yogurt is washed at night and fried. Sri Alarnath’s milk consumption is the most popular. Like the shrine, Lord Alarnath’s daily rituals include aalti, abakash, ballabh, annabhog, sandalwood, badsingh’s besh, pahud, and so on. Especially during Ansar, the doors of the temple are open during the Ansar, Mangal Aarti, vacation, Ansar Bes, Chandan Tulsi Lagi, Ballabh Bhog, public philosophy, morning incense, afternoon incense (milk consumption), Diba Pahud, Chiya Pahud, public philosophy, Sandhya Aalti, Meil The gates of the temple are closed in the guise of Ansar, in public view, in the evening incense, in the guise of the great lion, and then in the mountain policy. Alarnath’s milk offerings are in high demand due to the large crowds of devotees during Ansar. At this time, 50 bottles of milk are prepared in the temple kitchen every day. A pot of milk is made from ten shekels of milk. Add the required amount of rice, sugar, cardamom, khis miss, and so on.

There is a beautiful legend about Alarnath’s milkshake. How long did Alarnath’s priest, who had once served in the service, move to another village? Before leaving, he told his young son to have milk with Thakur. Even though the ignorant boy was completely ignorant about the method of worship, he reached out to Thakur holding a milk pot and closed his eyes with his shrewd intellect and devotion and appealed to Thakur, and saw that there was no milk in the pot. When she returned home with an empty pot, she couldn’t believe it. The son’s mother could not sleep all night, fearing that the cat may have eaten milk or something else had happened. The next day, the boy’s mother, Alarnath, was hiding in the back of the idol, sending her son with a milk pot. As soon as the boy begged Thakur to eat the milk, Lord Alarnath knelt down and cried out in fear as the boy’s mother was eating the milk. The hot milk fell on the Lord’s hands and face and burst. To this day, local worshipers mark the icon on the idol’s face. Locals believe that Lord Alarnath himself smelled the milk here, which made the consumption of milk here very delicious and acceptable to all the devotees of India of the year.